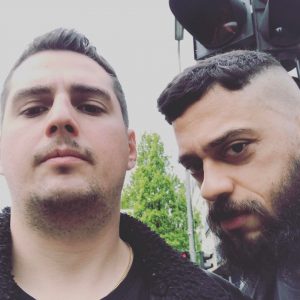 After 20 years of a lot of work, parties and music, Alexandre Antonio and Roberto Filippi (aka ScoutSom) have decided to create another project: to recreate soulful music raising the duo to a standard of sublimation of global trends.

In this new Live PA venture, the couple of friends produced a unique album in the history of the world of electronic music. They were able to mix the best of the Detroit Techno with the Divine Name of the Creator.

A quote about the release

for the album Our greatest inspiration for the album Sapientiae was the questioning about the future of Western civilization and the possible paths to the development of high culture.

we want to persuade you that beauty matters; that it is not just a subjective thing, but a universal need of human beings. If we ignore this need we find ourselves in a spiritual desert.

We tell you the truth, a man may not make himself king; only the blessing of him who holds the kingship can elevate a man to that high place. For sovereignty is a sacred trust that may not be bartered or sold; still less may it be stolen or taken by force.

Technique or art (in Greek). As FEPeters’ Greek etymology handbook points out, teknè or techne is something that emerges from experience (empeiria), from individual cases, and goes from experience to tekné when individual experiences are generalized into knowledge. of causes: the experienced man knows how, but not why. Thus it is a kind of knowledge and can be taught.

In the other polarity we have the know-how layer (techne, ars), a realizable knowledge, a pure technique, a know-how, that skill set which, in the polis plane, was qualified as deinotes politike.

Here there is a blind attitude to all values ​​(wertblind), as is the timbre of the sciences of nature and political art, of the empirical-analytical sciences, marked by technical rationality.

Emunat means faith and the word Art in Hebrew is Umanut, from the same verb Emunat. Art and Faith come from the same root Etymology. The meaning of having faith in God is to be an artist.

For ours constant need of reminder, it’s belief ‘Emuna’ as mentioned in The Book of Tanya that “Craftmanship” or craft is Umanut,the same word as belief. To get your profession well done you must hone your skills, and the same with belief in Speritual Forces (God).

Imhotep make a successful transition from death to eternal life, and to ensure his safety and well-being in the realm of the dead.

Egyptian Thoth, the Greek Hermes Trismegistus represent the Hebrew Enoch, acquiring the knowledge of the supreme deity through the eyes of another individual. In the Corpus Hermeticum it is Poemander while within the Book of Enoch (the Ethiopic Version said to have been written around the 5th century BC), it is the angels who enlighten the old man. Enoch then passes that knowledge and insight to his son Methuselah while in the Corpus Hermeticum; Hermes Trismegistus passes his information down to his grandson Tat. Obviously the 17 books (18 total) of the Corpus Hermeticum reflect more of a spiritual view of the ways of the world.

A quick look at the Hebrew word for ring, Taba’at, reveals some interesting – even inspiring – connections with the rest of creation. The root of Taba’at is three letters – Tet, Bet, and Ayin. There are three other words in Hebrew that share the same root. One is Litbo’ah – to sink. A second is Matbe’ah – coin. A third is Teva – nature, creation itself. They have the same root – the question arises therefore – what do a ring, sinking, a coin, and nature all have in common??

To figure this out, we need to decide which word is primary. We can pick the most general encompassing term, Teva, nature itself. Teva, in the Torah’s eyes, is Hashem‘s imprint on the world, it is the effect of the Omnipotent on the planet, His creation. It is doubly interesting to note that the word the Boreh Olam – Creator – uses to describe creation in Genesis (1:3, 1:10, 1:12, 1:18, 1:25, etc)  Teva, is Tov – good – two common letters of Tet and Bet, while Tiv, in modern as well as Rabbinic Hebrew, means character, or the psychological “nature” of a person.

A matbe’ah – coin – is made by imprinting, sinking some pattern into a piece of metal. And finally… Taba’at. Taba’at – ring, is only translated as such because that’s what we see when we picture that kind of jewelry on someone’s finger. But the actual word, Taba’at, at least insofar as jewelry is concerned, should be translated as “imprinter”. Why?

There are several places in TaNa”CH, in the Bible, where Taba’ot are used. When they refer to jewelry, the word is always used to signify a signet ring – a ring with an imprint, used to sign documents by Kings. It wasn’t something he just wore on his finger. It was the royal seal – the symbol of his power – that the king would sink into the wax seal on official state documents.